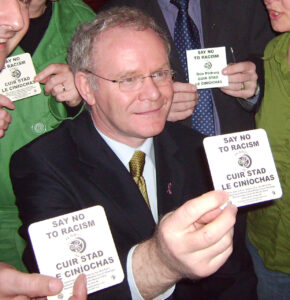 Martin standing up against racism

The Martin McGuinness Peace Foundation was launched by his family, friends and the Gasyard Wall Féile in October 2019 to celebrate Martin’s life and legacy.

Martin was known throughout the world for his courageous, determined and visionary leadership.

Martin’s commitment to a better future for all the Irish people won him respect and admiration across the political spectrum, both in Ireland and far beyond.

His leadership and his tireless pursuit of justice and equality continue to inspire many people across the world.

The Peace Foundation celebrates Martin’s life, work and achievements as a leader, a political activist and an international statesperson – promoting his aims, objectives and progressive ideals of:

The Foundation is promoting these goals through an inclusive program of education, sport, debate, art and culture which is open to all.

We want to tell Martin’s story and also to advance his goal of an agreed Ireland based on equality, inclusion, respect and reconciliation.