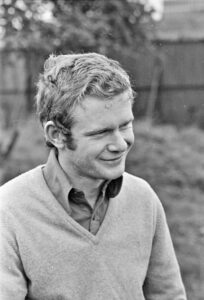 Born into a family of 5 brothers and 1 sister, Martin attended St. Eugene’s Primary School and then the Christian Brothers technical college, (Brow o’ the Hill) in Derry.

Growing up, Martin witnessed all around him the discrimination that nationalists suffered in the north of Ireland and in his native city of Derry. In response Martin became active in the Civil Rights campaign of the late 1960’s – a campaign inspired by the Civil Rights Movement in the USA.

In 1972 he was part of an Irish republican delegation who met with the British government in London and from that period onwards Martin was to become one of the most prominent Irish republican leaders of his generation.

In 1974 he married Bernadette Canning and they had four children Grainne, Fionnuala, Fiachra and Emmett. 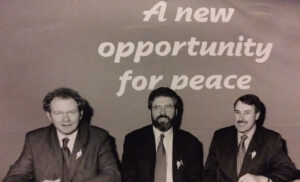 Martin first became involved in electoral politics in 1982 when, following the electoral successes of the 1981 hunger strike period and the election of hunger strike leader Bobby Sands to the British parliament, he contested the election to a political assembly in the north of Ireland. Martin was elected for the Foyle constituency and from that period on, he held elected office until his resignation in 2017.

He served as the Sinn Féin Member of Parliament for the Mid Ulster constituency between 1997 and 2012 and as a Member of the Legislative Assembly in the north of Ireland from 1998 to 2016.

In 2016, he was elected to his home constituency of Foyle.

Martin made a very significant contribution to the advancement of peace and reconciliation which has been rightly recognised by all shades of opinion. Appointed as Sinn Féin Chief Negotiator during the emerging Irish peace process in the late 1980s, Martin was instrumental in achieving an IRA cessation of hostilities in 1994. He also led the Sinn Féin negotiating team in the subsequent peace talks and in shaping the 1998 Good Friday Agreement, a key development in bringing an end to the conflict in Ireland and between Ireland and Britain.

In 1999 Martin was appointed as Minister of Education in the newly formed power-sharing Executive in the north of Ireland. 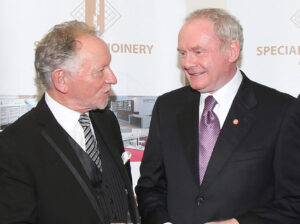 In 2007 he was appointed as Joint First Minister, a post he was to hold until January 2017, leading a power-sharing Executive with the main Ulster unionist party, the DUP.

In September 2011 Martin temporarily stood down as Joint First Minister to take part in the Irish Presidential elections and was the only candidate not allowed to vote because he lived in the north of Ireland.

Martin travelled extensively during this time to share the experiences of conflict resolution in Ireland with other regions in conflict. His efforts have reverberated across the world, in countries where politicians and leaders struggle to resolve conflict.

He met with many political leaders, including Nelson Mandela, and formed a particularly close and enduring friendship with Cyril Ramaphosa, the President of South Africa.

In January 2017 Martin resigned as Joint First Minister is response to the arrogance and disrespect of the DUP and brought to a head by a massive financial scandal related to a renewable energy scheme under the stewardship of the DUP.

The demands of both activism and leadership demand a heavy price for those entrusted with heavy responsibilities. During 2016 Martin developed an illness, amyloidosis, which was to eventually take his life on 21st March 2017. Tens of thousands of people attended his funeral; the biggest Derry has ever seen. Among those attending were political leaders from across the world, including former US President, Bill Clinton.

The Foundation’s tribute to Martin on what would have been his 70th birthday in May 2020, attracted over a quarter of a million views.